The 73rd Annual Exhibition of Shoso-in Treasures is scheduled to run from Oct. 30 through Nov. 15 at the Nara National Museum in Nara City. In anticipation of the show's opening, Mary Lewine, a Ph.D. candidate at the University of California, Berkeley, who is currently a research fellow at the museum, describes the timeless appeal of the Shoso-in's many ancient treasures.

By Mary Lewine
Special to The Yomiuri Shimbun 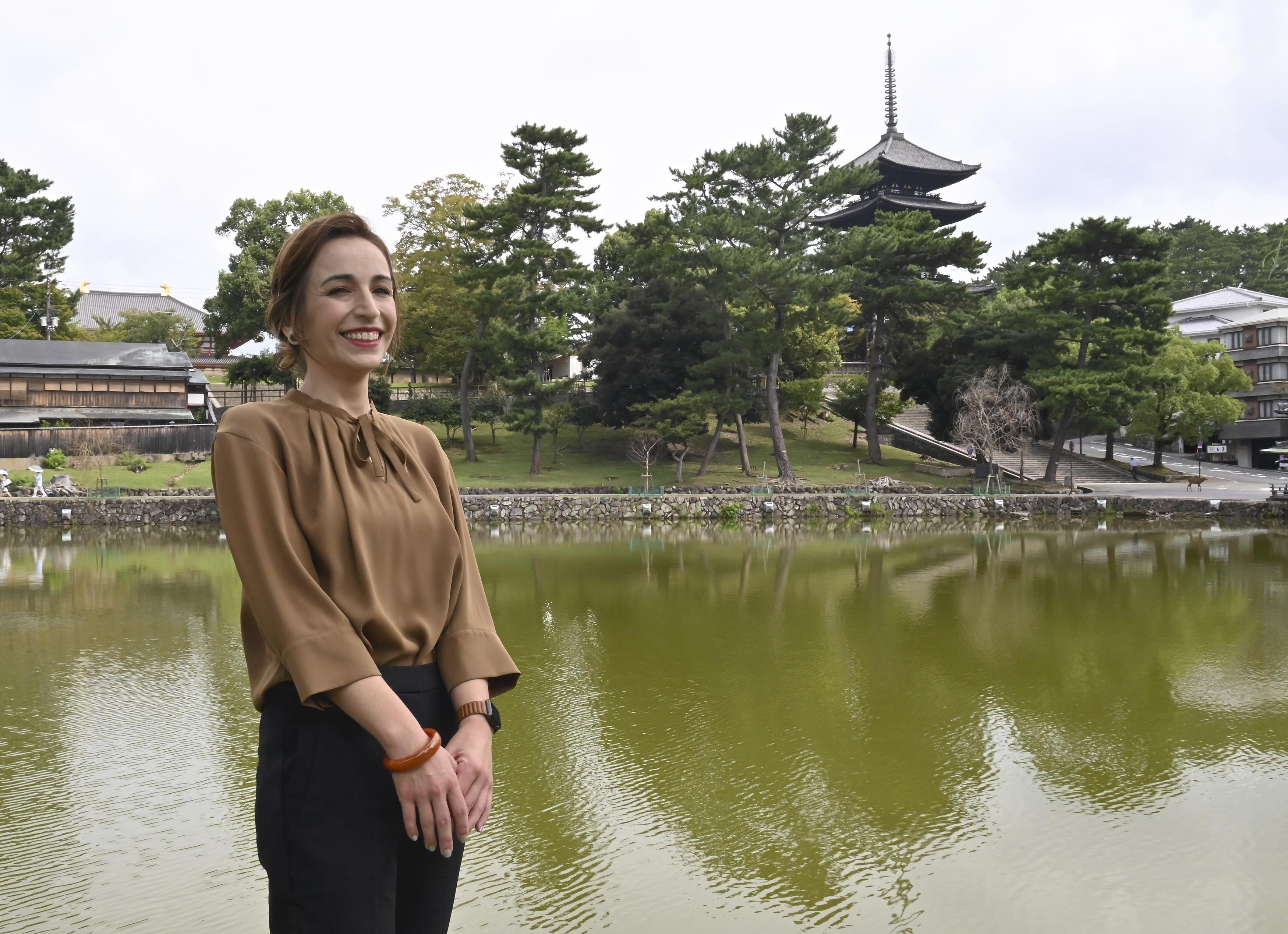 Yomiuri Shimbun file photo
Mary Lewine stands in front of Sarusawa Pond at Nara Park in Nara City on Sept. 13. The five-story pagoda of Kofukuji temple is seen in the background.

The Shoso-in at Todaiji temple in Nara is a repository that has stored thousands of treasures for centuries, granting us the marvelous opportunity to experience a collection of wonders assembled mostly in the eighth century. The condition of the treasures is remarkable: They were stored above ground in a structure designed to facilitate their preservation and protected by generations of vigilant stewards. Each autumn, the Nara National Museum holds an exhibition presenting a selection of about 60 of these treasures.

The annual Shoso-in exhibition shows us just how interconnected the world was at the time of the Shoso-in collection's formation in the eighth century. The treasures represent the ties between cultures and places along the ancient trade routes known as the Silk Road, connected to the eighth-century capital of Nara at their eastern end. The materials and techniques used to produce the treasures vividly reveal the depth and complexity of cross-cultural interactions.

In 756, Empress Komyo (701-760) gifted the most prized possessions of her late husband Emperor Shomu (701-756) to the Great Buddha of Todaiji. As objects worthy of an emperor, these treasures represent the pinnacle of technical artistry and material luxury. It was also the unique status of these precious objects as offerings to the Buddha that assured their preservation. Many of the donations that Empress Komyo and other high-ranking aristocrats presented as donations can be interpreted to symbolize the relinquishment of sensory indulgence and worldly attachments in accordance with Buddhist practice. At the same time, the selection of objects was also based on the principle that the more valuable an object was, the greater the Buddhist merit its donation would generate.

Treasures from distant lands were held in particularly high regard for their rarity, a phenomenon illustrated by the surprising number of donated treasures of far-flung origin. An exquisite example on display this year is the Clear Glass Footed Dish produced from alkali lime glass likely in present-day Iraq or on the east coast of the Mediterranean sometime between the sixth and eighth centuries. Strikingly large among surviving glassware from that period, it traveled a great distance overland before its maritime journey to the Japanese islands. Its provenance contributed to its perfection as a suitable offering for the Great Buddha of Todaiji.

Other imported treasures with more proximate origins are no less compelling. One of the ink sticks on display this year is inscribed with the name of the artisan who crafted it and a Tang-dynasty date corresponding to the autumn of 716. Ink sticks are made by kneading together soot and animal glue. This treasure, therefore, contains soot gathered from the fires of what was probably pine resin that people burned in China around 1,300 years ago.

For someone who has traveled to Nara from afar, encountering these treasures that likewise journeyed great distances to this beautiful part of the world is a special pleasure of the Shoso-in exhibition each year.

Lewine was born in New York City in 1985. She is currently pursuing her Ph.D. at the University of California, Berkeley, while serving as a research fellow in charge of English interpretation at the Nara National Museum. She has lived in Nara since 2019.